Hug Sleep is a product from a husband and wife pair of entrepreneur from Milwaukee, WI, that is designed to comfort the user and relieve stress. Together, they developed a "sleep pod" to simulate the feeling of sleeping in a cuddle for those times when they have a hard time sleeping together. The material compresses the wearer and brings a sense of calm. The entrepreneurs themselves admit that they've essentially invented an adult swaddle.

According to the entrepreneurs, the material in Hug Sleep doesn't trap heat and it's machine washable.

Robert is asked to come up and try out the product. At first he slipped into it like a pair of pants but, as it got to his arms, he had to kind of pull it up over one arm and then the other. They suggested that he lay down before trying to get his arms in in case he were to fall over (which he did) he could still break his fall. Wearing the whole thing, Robert looks encased like a mummy but Robert professed that it was soothing. At the bottom is a little vent that someone can poke their foot through and, when asked about it, the entrepreneurs said they added that for people who like to regulate their temperature by exposing their feet.

Daymond attempts to get things started by asking about the $1,500,000 valuation Hug Sleep came into the tank with but Kevin talked over him about wanting to hear about "market acceptance", otherwise known as "sales".

Hug Sleep has been on the market for sixteen months and, in that time made $490,000 in sales. In the last twelve months alone, Hug Sleep saw $335,000 in sales, grossed $215,000 on that, and netted $140,000. Their sales are primarily direct to consumer and on Amazon. Each Hug Sleep costs $22.50 to make and retails for $99.99 though the entrepreneurs think they can lower the manufacturing cost with greater scale. Most customers are acquired through Facebook or Instagram and typically cost $11.50 per customer to acquire.

The sharks all compliment on how comfortable the fabric feels and the husband in the team says that he loved weighted blankets but ran into issues with them trapping heat and with difficulty washing them. He wanted something with the same feeling but without the issues so, together, they decided to use compression rather than weight. The wife in the team is a trained therapist that specializes in anxiety disorders and has said she's found this to be therapeutic.

Hug Sleep was started with just $2,500 of the entrepreneurs own money and they claim to have been profitable within the first week or two. 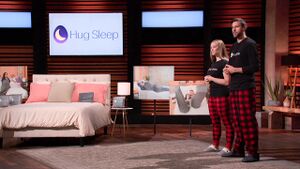 Kevin makes an offer that he thinks might be more in line with what the entrepreneurs are looking for: $150,000 for 15%. But before they can accept, Lori jumps in with an offer of her own: the same as Kevin, $150,000 for 15% with the deciding factor presumably being with whom they'd rather work with.

The wife member of the team presses the sharks to ensure that they know that Hug Sleep's goal really is to try and help people and make them feel better. The wife, herself, says that she has benefited from it because it reminds her of being tucked in by her mother, who she lost at seventeen to suicide. She says that people really need what Hug Sleep can provide and she wants to ensure that they team up with a shark who is as passionate about it as she is.

Mark says that he loves the product and that there are people in his house who have sensory issues. He offers the entrepreneurs a choice, exactly what they want, $150,000 at 10% equity in the business or $300,000 for 20% of the business so he's just that much closer of a partner. Lori then matches this offer and Daymond then matches them. Robert then offers only the $300,000 for 20% offer and it's an official frenzy folks!

The entrepreneurs are naturally overwhelmed and unsure with whom to go with, asking whether there might be a couple of sharks who would like to partner up. Mark & Lori, as long time and frequent collaborators (see the chart at the top), form one team while Robert marshals Kevin and Daymond into another.

Both teas of sharks are making the exact same offer but the entrepreneurs choose to go with Mark and Lori. And, since $300,000 at 20% is exactly double in terms of money and equity what the entrepreneurs came in offering, there is no bite to the value! The entrepreneurs now have $300,000 in fresh capital, two shark partners, and the same $1,500,000 valuation they walked in with.