AnimatedLure is a business out of Plano, TX, started by two guys who love fishing but are frustrated by the traditional means with which to do so. They state that, when they go fishing, they often find themselves spending more time messing with lines and lures than actually fishing. So they created the AnimatedLure to take away some of the pain.

The AnimatedLure is a rechargeable, robotic lure that swims in an amazingly life-like manner. Which is the point because it's designed to look like a real fish to lure bigger fish in.

As Daymond is the known fisherman of the group, Lori asks him for his impressions. Daymond then asks about rust, how often a new one need be purchases, and other maintenance issues. The entrepreneurs say that the AnimatedLure can be used about forty times.

One entrepreneur is a project manager at a manufacturing facility and the other is a mental health counsellor. Both emigrated from Iran. One entrepreneur's fisher father believed that fishing was about finding solutions to problems and the AnimatedLure is theirs.

The mini lure costs $8 landed and retails fore $29.95. The "classic" costs $10 and retails for $32.95 while the large costs $16 and retails for a whopping $79.95. Most sales are direct to consumer and through placement in forty stores in Canada and a handful of independent retailers.

Thus far in the year, AnimatedLure has earned $247,000 and projects earning $500,000 by the end of the year and $675,000 in the following year. The company caries zero debt and was funded $125,000 by the two entrepreneurs who own the business equally. They have come into the tank because they're really looking for a shark's help with sales. 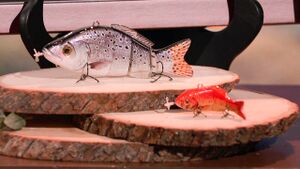 Mark says right away that he's not a fisherman and, despite liking the entrepreneurs, is out. Lori says the same and also says that she thinks it's a little too early.

Mr. Wonderful says that AnimatedLure isn't a company, they're a product and he expresses concern about how he would ever see a return on his investment with them. Lori guesses that he's hunting around for a royalty and he then credits her for giving him a great idea. He offers the asked for $325,000 in exchange for the 10% equity being offered as well as a $3 per unit royalty on every item until earning him $1,000,000.

Robert remarks that he thinks Kevin made a great offer. Also, something that bothered him during the pitch was when the entrepreneurs said that sales aren't what you know but who you know and he strongly disagrees with the sentiment. Also, it's not the business for him, so... out.

Daymond says that he loves the product but that with their valuation, he has a hard time seeing how he would see a return. He says that AnimatedLure would have to make $35,000,000 in order to give him a distribution that would repay his investment. And so... the fisherman is out.

With Kevin the last shark still in the deal, the entrepreneurs attempt to counter him at $500,000 in capital at 20% equity rather than go for the royalty. But Kevin wonders whether he'd ever see his money again without the royalty side. So the entrepreneurs try again with $325,000 in capital for a 10% equity share plus a $1.5 per unit royalty until earning back $500,000.

One might think this would interest Kevin but, instead, he says that he doesn't think that they're going to be able to come to an agreement. It looks, for all the world, as though he's about to go out when the entrepreneurs take him up on the deal. In a post-deal segment, the entrepreneurs acknowledge that Kevin's deal was on the sharky side but that, to them, it was worth it because they believe in the value he can bring.

As far as being sharky is concerned, your Stats Shark usually ranks that based on the amount of value a shark bites off the total value of the business. In this case, Kevin actually preserved the value and, while $1,000,000 may be a bit much of a royalty on a $325,000 investment (he usually asks for double, which would have been $650,000 in this case), if he doesn't help with sales, it will just be all the slower until he gets his money. So... if that's sharky, there are certainly a lot of other businesses that wouldn't mind swimming in those waters.