Quick question, which business came into the tank looking for $900,000 in investment while offering a 2% equity stake, imparting a $45,000,000 value with a twenty-eight year old entrepreneur? If you answered chirp., a manufacturer of a new type of foam roll out of Provo, UT, you would be correct!

After Zero Pollution Motors, chirp. represents the company with the second highest proposed value to enter the tank when this episode aired.[1] So, that's why this is being mentioned at the top of this deal, because it's remarkable.

Anyway... the chirp wheel is pretty much what it says it is. It's a wheel. There are three different sizes and those sizes represent the amount of pressure that will be applied as a person rolls around on it. But, other than that, it's exactly like a foam roller and serves the same purpose. Naturally, its design has a patent pending.

A three-pack of chirp. wheels, representing all three sizes, retails for $99 and is $21.96 in landed costs.

Originally, chirp. had what the entrepreneur believed to be three months worth of inventory but that sold out within three weeks after the lockdown went into effect. Because it's been slow getting the inventory, the entrepreneur guesses that the business is losing $4,000,000 a month in sales.

The entrepreneur has no partners and the business carries no debt. 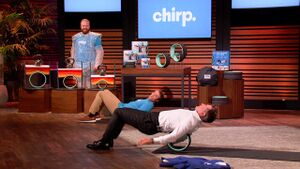 Robert trying out the chirp roller

Naturally, with numbers like this, the sharks want to know why this guy is even in the tank. And Lori asks the question. The entrepreneur responds that the five sharks in front of him know things that he can't know despite making a humble brad that he reads sixty books a year. Of course, he's twenty-eight while the sharks are... "older?" And being called old goes over about as well as one would expect.

But, seriously, Daymond wants to know where all his cash is going and the entrepreneur responds that it's going to filling the inventory for the next purchase order. He may have made $4,000,000 in profit so far but his next PO is for the exact same amount. Still, Daymond wants to know if the entrepreneur is actually there to make a deal because 2% equity isn't exactly mindblowing to a shark and he usually likes to see people who don't have jobs or don't have an income on the carpet. The entrepreneur, naturally, responds that he wants to see a chirp. wheel in everyone home.

Mark comes to the entrepreneur's defense in saying that the entrepreneur can grow his business and hire those people Daymond is talking about but Daymond seems unimpressed.

The entrepreneur says that he's serious enough about wanting to make a deal that he'll even return the investment amount to any shark that makes a deal with him by the end of the following year. So Lori takes him up on it and offers $900,000 to be repaid in the next year plus the 2% equity that has been offered.

But she's not the only one. Kevin says that he likes the business and thinks that he can reduce the customer acquisition cost by 15%. So he offers $900,000 for 2.5% in equity with a $3 per unit royalty until it earns him back $2,700,000. He says that he thinks this is a better offer because there's no time pressure on repayment.

Daymond then drops out because he prefers investing in businesses that actually need investors. Mark indicates that he thinks a large part of chirp's sales are coming in part due to buying in the pandemic and so he's out.

This spurs the entrepreneur to ask if Robert wouldn't partner up with Lori but no one asked Lori if she'd partner with Robert and she says as much, asking why she would even want a partner. So she modifies her deal to be the same two year loan but now at 2.5%, which the entrepreneur notices and asks about. It's not clear if Lori misspoke but she decides to stick to it. But when the entrepreneur attempts to dicker over the half a percentage point, Mark begins to voice his displeasure and Lori begins thinking openly about going to 4%. So the entrepreneur agrees on the 2.5% and a deal is struck.

Because this deal mostly involved a form of debt, we interpret the equity component to be on top of the main terms of the deal and, therefore, we don't factor that in to the company's value. So, effectively, chirp. took on a $900,000 loan to be repaid in two years and gave Lori 2.5% of the company for the honor of it but they had no bite to their value.