Touch Up Cup is one of those quintessential Shark Tank pitches. It's a product out of Cincinnati, OH, pitched by a father and son entrepreneurial team that is trying to solve a small problem with a new product. It is the end result of the cliche, "There must be a better way!" and yet, still pretty cool.

The problem that Touch Up Cup is trying to solve are those paint cans almost anyone living on their own probably has in their hall closet. You know, those cans that contain the same mix of paint as on your walls so it should blend well again in case you need to touch it up? (Forgetting the fact that sunlight, smoking, and human skin shedding discolors the wall paint over time and it won't actually match...) We hold onto those buckets for a small amount of paint because... where else will we keep that paint?

Hence, the Touch Up Cup. With an airtight silicon seal, it can keep old paint fresh for... well... as long as you'll need it. And, best yet, it's being sold in 4,000 locations. Part of that is from a private label (non-exclusive) partnership with a large paint tape manufacturer that is getting them into 2,000 locations alone.

The fifteen year old son does most of the pitch and Kevin points this out, stating that usually the kids do the early pitch and the parents bring in the numbers but that, in this case, the father has been relatively silent. The son then responds that he's been to trade shows where the people they've met with have essentially expected him to be part of the furniture.

Because nothing can't get a patent these days, including a sippy cup for paint, the Touch Up Cup carries four patents, three for design and one for utility. Additionally, the business has launched a product designed to keep bagels and donuts fresh and that already represents 5% of the company's sales. 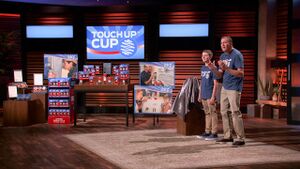 The father & son behind Touch Up Cup

This is guest shark Blake Mycoskie's first deal in the Shark Tank but that doesn't make him shy. Saying that he wants to help grow the business, he immediately offers $200,000 for a 25% equity stake in the company.

Daymond then offers $200,000 for 17.5% equity to, as he says, "cut the legs" off of Blake. Mark then drops out, citing the two "great" offers that have already been made, though he does compliment the entrepreneurs first.

Mr. Wonderful then says that he wants the son to drop out of school and become the CEO. But when the son says that he just graduated 8th grade and doesn't see that as a possibility, Kevin drops out. This does prompt Daymond, though, to ask who will be running the business or whether they would have to hire someone. The father says that, if they could increase their sales to be able to afford him, he would like to run it. This then prompts Daymond to revise his offer to a $150,000 investment at 20% equity because he thinks he would have to do a lot of the work or find people who could.

Lori then pipes up and says that the entrepreneurs have some great offers on the table and that Blake or Daymond could help them run the company but that she isn't interested and, therefore, is out.

The son, always asking the right questions, asks if the sharks would help fund purchase orders (because your Stats Shark is a firm believer that the best way to land a shark is to have outstanding purchase orders). Blake says that he can't promise anything but that it would be, naturally, in his best interest to help fund them. But Daymond says no because he doesn't want to be the bank, that he wants to use other people's money to fund things.

The son attempts to counter Blake, saying that 25% is a lot of the company to give up and asks whether the shark might not consider 17.5%. Blake says that for $150,000, sure, but for $200,000 he would need the full 25%.[1] But, because it's not self-serving in the least, Blake says that he thinks the extra money and the extra equity would be worth it for them. With one last try, the son asks if Blake would accept 20% instead of 25% but the new shark says no.

In the end, the son accepts Blake Mycoskie's deal even though it represents a $700,000 bite off the value of the company. Still, not bad for Blake, first deal in the tank and he's already got an investment under his belt!