Pooch Paper is a product and a company out of New York, NY, begun by a former investment banker that had a mission to... well... clean up the world. According to this entrepreneur, there are 22 billion pounds of dog poop produced in the United States alone. A lot of that, especially in cities, is picked up by people with plastic bags. This, she then said, presents a huge mound of stinky... opportunity!

Pooch Paper is a paper alternative to the typical plastic bags. Essentially, it is sheets of paper that someone can use to cover the poop, pick it up, pinch the sides together, and twist closed. She demonstrates with little golf ball sized balls and Kevin then tells a heart warming story about a Great Dane owner and the poop he had to pick up, pointing out that Pooch Paper wouldn't be big enough for what those horses produce. The entrepreneur said that Pooch Paper would be releasing a new SKU later in the year with bigger sheets.

The advantage of using Pooch Paper over traditional plastic bags is that paper is bio-degradable and compostable. Additionally, this product is made in the United States with renewable energy, so it's the pet poop picker upper for people who care about the environment.

Guest shark Kendra Scott then asked how someone would hold it since plastic bags come in those easy little rolls and a million manufacturers make roll holders. The entrepreneur responded that she has partnered with a sheet holder and sells that product through her site.

Pooch Paper has been on the market for a whole seven months and seen $50,000 in sales since. But, the entrepreneur promises, she sees it making $400,000 by the end of the year because the product will be launching with Target nationwide in a week. 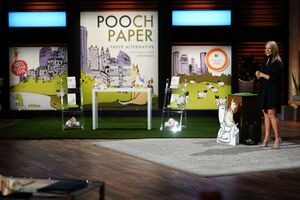 It being a day that ends in "Y", Mr. Wonderful has issues with the value. But the entrepreneur says that Pooch Paper is already in eighty-two stores as well as being online, plus, you know, the Target thing.

Mark compliments the business but says it's great for her but not very exciting for him so he's out. Barbara follows right after, saying that the price is too high when compared to the competition. Lori is right behind her, saying that the entrepreneur is making all the right moves and that she doesn't think Pooch Paper needs a partner.

Kevin, naturally, says that at $1 per unit, it provides him with good motivation. He cites Wicked Good Cupcakes, which he says has just paid him his millionth dollar in royalties and has never regretted it.

Surprisingly, Lori says that she thinks it's a great offer. And new shark Kendra says that she thinks Kevin's deal is as good as it gets and is out. But the entrepreneur still isn't sure because she doesn't like the idea of giving up that much on every sale and worried about what it will do to her cash flow. Kevin responds that he'll work with her to lower costs and that seems to tip the entrepreneur over and the two of them make a deal.