P-Nuff Crunch is a new kind of healthy snack food created by a food scientist. The food scientist doesn't just formulate new foods, he cares about what goes in them and whether they're healthy, as demonstrated by his... ripped body and Barbara's vapours.

P-Nuff Crunch is made from high quality plant based protein and comes in three flavors: original, cinnamon, and cocoa. And it contains only three grams of sugar and 130 calories. Because of this, it sits on store shelves next to healthier snack foods.

Costs $0.75 to manufacture, retails for just $1.70 per bag, and retails for between $3.29 and $3.99. It is carried by 450 stores and is even sold overseas. Unfortunately, because of these razor thin margins, P-Nuff Crunch only has $104,000 in lifetime sales despite being started four and a half years ago.

Part of this is because P-Nuff Crunch uses peanuts and peanut dust is considered a contaminant these days by food packers. Because of this, he kept losing manufacturers and ended up having to borrow $250,000 from his brothers and put in $125,000 of his own in order to build his own factory.

In the current year, P-Nuff Crunch has made $65,000 by the time this episode aired and the entrepreneur sees earning as much as $200,000 by the end of the year.

The entrepreneur had a hell of a story about coming from Honduras and speaking no English to getting his PhD and working for the two largest food companies. 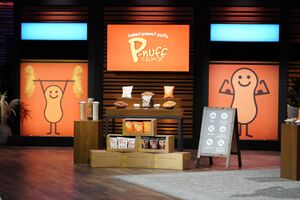 As always, Kevin has issues with the $3,000,000 valuation on $104,000 in lifetime sales. But the entrepreneur then goes on to violate the First Rule of Shark Tank by stating that snack foods are a $35 billion business. (It's interesting Mark didn't call him out on this, probably because of how this deal ends...)

Guest shark Kendra Scott asks about any competition that P-Nuff Crunch might have but the entrepreneur reassures her that he's the only one who is and can make it.

Mark relates a story about how his wife brought it home one day and how he essentially devoured a bag but that his wife could never find it again! It's no surprise then, when he offers $300,000 in exchange for 25% equity.

The entrepreneur came in looking to give up only 10% so he waffles a bit and Kevin calls him out, wondering why he hasn't already jumped at the offer. The entrepreneur then tries to get Mark down to 20%. But Mark keeps to to 25% but raises the cash to $400,000. Finally, the entrepreneur decides to go for it.

Because Mark raised his cash offer, despite the fact that he took over twice as much equity, his bite only took $1,400,000 off the value and not quite halved it. Given the anaemic sales, this seems more than fair in order to strike a deal with Mark Cuban.